You might be a fan of lacrosse or even a lacrosse player, but do you know where lacrosse came from?

Lacrosse is actually an ancient sport first practiced by Indigenous tribes in North America. To the Haudenosaunee, the game is a gift from the Creator, a medicine game for men used for healing and to lift the spirits of the people.

History of the Sport 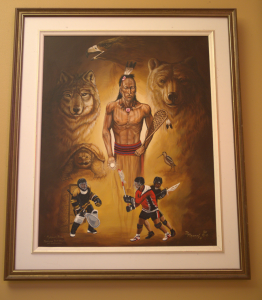 In the 1600s, French Jesuit missionaries first documented that they saw lacrosse being played by native people in the St. Lawrence River Valley, and it’s the French that gave Lacrosse its name from the curvature of the stick. In Mohawk, lacrosse is called tewa:aráton, pronounced de – wa – ah – lah – doon, which translates to “it has a dual net.”  Another Mohawk name is Teiontsikwaeks, which means “they bump hips. ”

In Akwesasne today, lacrosse is an important and vibrant part of our community. The game has two forms, recreational and traditional. Recreational lacrosse is played all over the world and is either outdoor (field lacrosse) or indoor (box lacrosse). The traditional form is considered medicine and used for healing. Many of our kids in Akwesasne grow up playing lacrosse, and the growth and importance of lacrosse among female youth were recently recognized by the Washington Post. 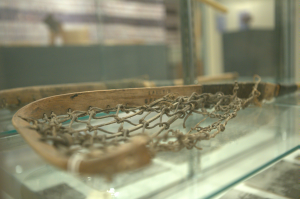 Mohawk lacrosse stick making is a tradition and a trade that has been passed down for generations. Akwesasne became a commercial hub for making wooden lacrosse sticks starting in the 1920s. The Mohawk lacrosse stick makers of Akwesasne once manufactured 97 percent of the world’s lacrosse sticks, an output that went on for decades until the popularity of plastic sticks affected the demand for wooden sticks. While plastic sticks made with synthetic materials grew in popularity, traditional sticks made of wood and natural materials are making a comeback because they are stronger and last longer. 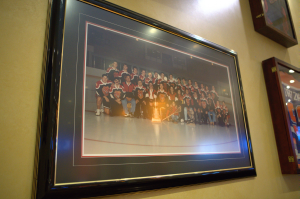 Youth lacrosse leagues are the pride of Akwesasne

Make sure to stop by the Akwesasne Lacrosse Hall of Fame, located inside the A`nowara`ko:wa Arena, also known as the Turtle Dome as it looks like a turtle from an aerial view. You will see photos and plaques of Akwesasne’s most famous lacrosse players, some rising to the ranks of the best players in the USA or Canada. There you will find a stunning, giant mural of lacrosse being played as an original medicine game.

There are several teams that play in Akwesasne and if you are lucky you can catch a game. The Akwesasne Indians play in the Ontario Junior B Lacrosse League (OJBLL). There are also many high school and other teams to see. Akwesasne Storm minor lacrosse league also has a number of teams. You can find local lacrosse memorabilia on view at Sticks Sports Bar & Grill in the Akwesasne Mohawk Casino Resort along with artwork portraying traditional lacrosse. 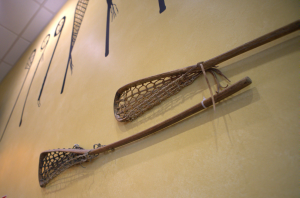 Handmade sticks continue to be made in the community

While you are in town, make time to visit a lacrosse stick-making shop. Traditional Lacrosse is well known for its quality lacrosse sticks. The operation was started in 2012 by three Akwesasne Mohawk friends, Evan Cree, Colin Hall, and Carey Terrance who wanted to ensure the longevity of the original game by increasing the accessibility and availability of the traditional wooden stick. They make nine different size traditional wooden lacrosse sticks from hickory crafted by Akwesasne Mohawk makers. They also offer laser engraving services and custom trophies, medallions, plaques, and other items making it an ideal spot for a special gift.

Mohawk Lacrosse is another traditional lacrosse maker that has been around for generations in Akwesasne making wooden sticks, which have been sold all over the world.

Living Off The LandFood & Drink, History & Culture, Our Stories