Akwesasne Travel is the official Destination Marketing and Management Organization (DMMO) for Akwesasne and is based out of the Office of Economic Development of the Saint Regis Mohawk Tribe located in Akwesasne, New York. 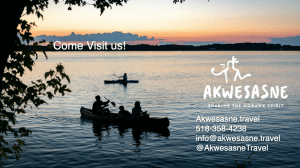 Since 2008, the Akwesasne community has had a vested interest in the development of cultural tourism to restore our cultural heritage and provide alternative employment opportunities. Many reports and documents followed including Sharing the Spirit (2008) and the Akwesasne Comprehensive Community Development Plan (2009), which once again identified cultural tourism as an opportunity for economic development.

In 2017 the Saint Regis Mohawk Tribe was awarded the Administration for Native Americans Social and Economic Development Strategies grant to establish Akwesasne Cultural Tourism. This grant allowed for dedicated staff to pursue major areas of tourism development, including establishing a Destination Marketing and Management Organization, tour operations, tour development, and tourism infrastructure.  A U.S Economic Development Administration Grant was also awarded to the Saint Regis Mohawk Tribe in 2017 that assisted with developing a Marketing and Branding strategy.

Akwesasne is a Mohawk community situated along the banks of the St. Lawrence River. Mohawks and other Iroquois settled along the banks of the grand St. Lawrence River thousands of years ago, long before Europeans first made contact with the New World. The community today lies at the confluence of the Raquette River and St. Regis rivers, making it easy to understand why the community’s earliest ancestors made their homes here.

Following the War of 1812, Akwesasne was split in two as the international border between Canada and the USA was drawn right through tribal lands. This split created northern and southern portions that lie within the Canadian provinces of Quebec and Ontario, and the U.S. state of New York.